As the 3rd major sequel in the well-acclaimed RPG series, Deus Ex: Mankind Divided has finally been released in late August. It was also a grand debut of the Dawn Engine, which was built for “PCs and the new generation of consoles” according to the developer, Eidos Montréal. Yet, the initial version was only compatible with DX11, and not until early September was it patched to run in DX12. So it’s time for AORUS Lab to test how it performs with the latest generation graphics cards, and to find out which does the better job: DX11, or Dx12?

First up, let’s skim over the minimum and recommended requirements listed by the developer. On the chart below, we put the other two titles along with Deus Ex: Mankind Divided to compare: Rise of the Tomb Raider, the last epic title published by Square Enix, and, of course, Deus Ex: Human Revolution, the grand predecessor. 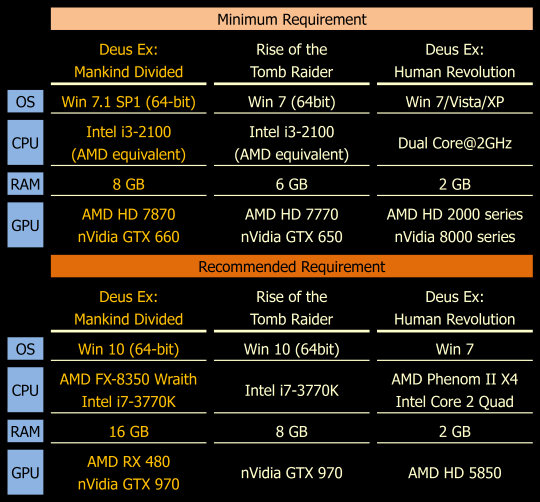 Overall, the requirements remain almost the same as of Rise of the Tomb Raider, only with higher RAMs. What’s interesting is the latest AMD RX series has been listed as recommended, while the GTX 10 series, on the other hand, has not. Does it mean the performance of GTX 970 is basically equal to RX 480? Let’s find out! 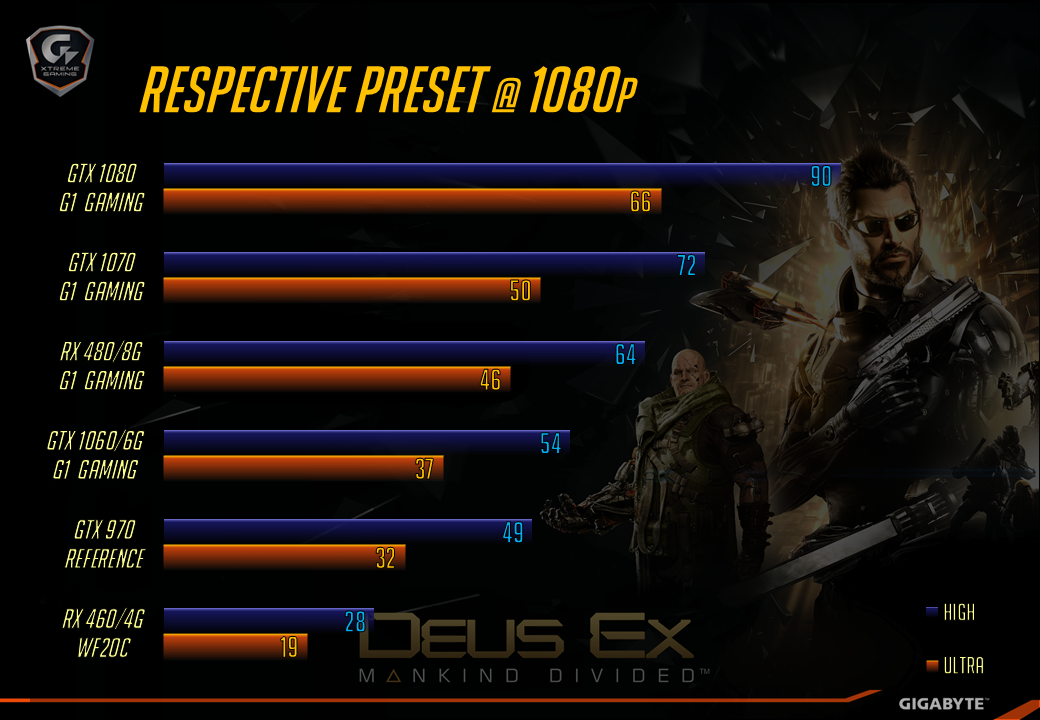 The first performance test is to examine how well these cards can run at 1080p. We chose High (3rd out of 5) and Ultra (highest) presets for our test. Surprisingly, Deus Ex: Mankind Divided is so demanding that even the reigning GTX 1080 delivers slightly over 60 FPS at Ultra preset, while others with 50 FPS or lower. Since it takes 60 FPS to secure the best gaming experience on PC, and you shouldn’t make do with under-40, it is recommended to equip with RX 480 at least to play at 1080p. 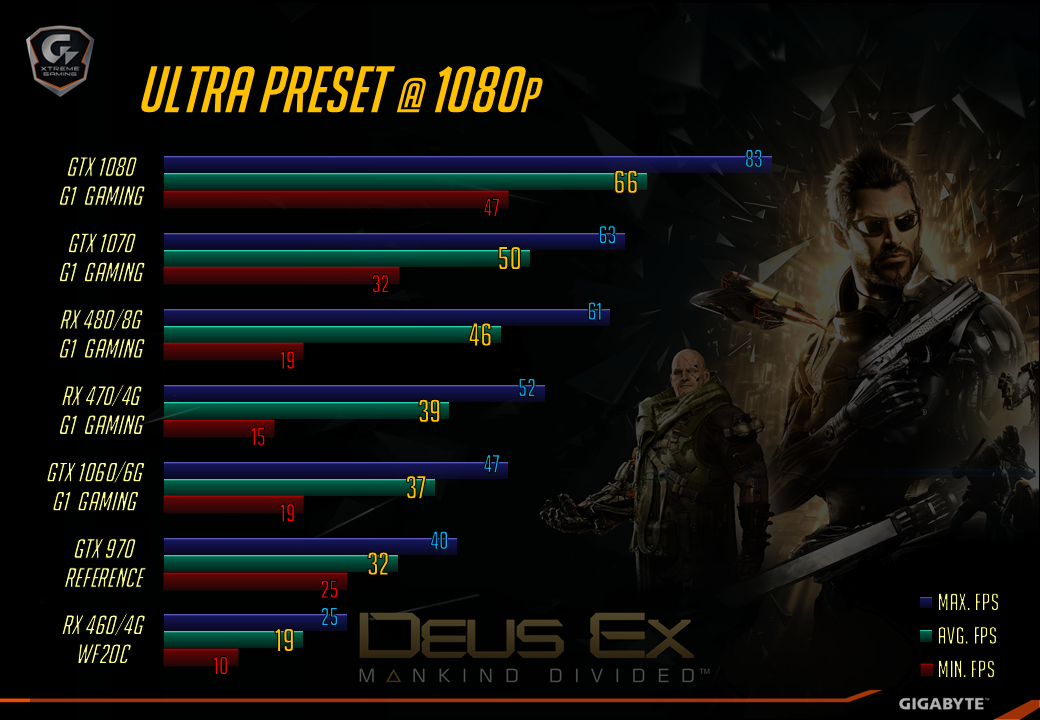 Now we look closer to the Ultra preset to specify the maximum and minimum FPS of each card. It turns out even RX 480 can suffer from great FPS drop in the worst case, and the minimum FPS of all cards are below 50. For those who aim to play with the best graphics quality, you definitely need a GTX 1070. 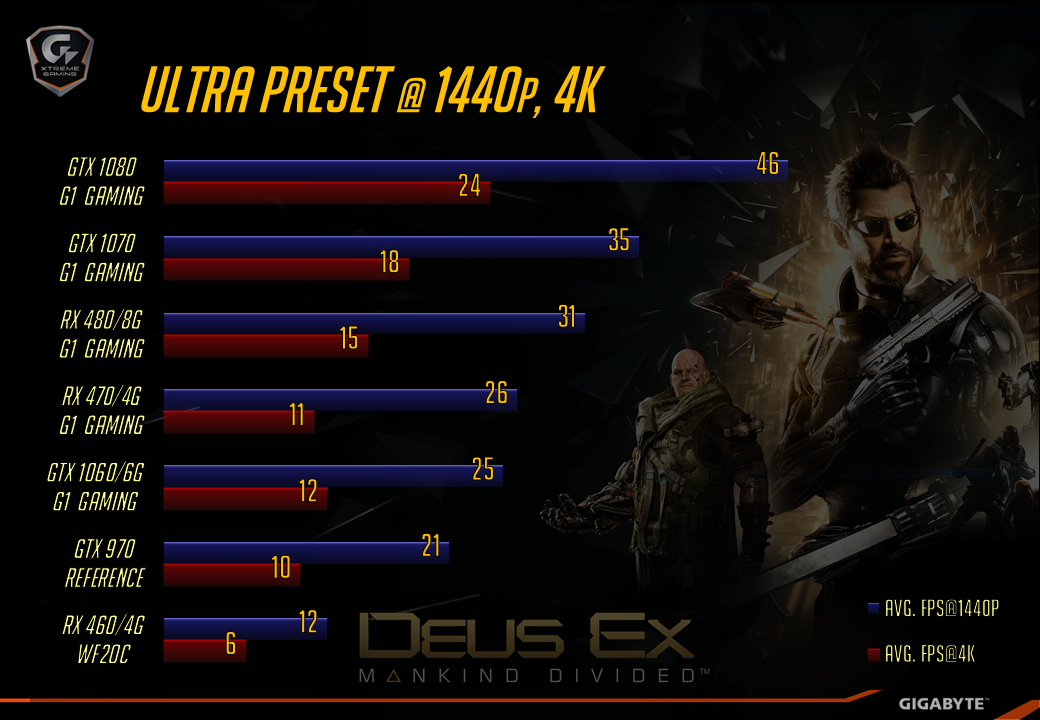 We, however, ran the test at 1440p and 4K even though the numbers at 1080p are already mind-blown. And here we are. As you can probably figure, no cards on the list are capable to deliver 60 FPS or above at higher resolution. You may need two GTX 1080s in SLI mode to achieve that. 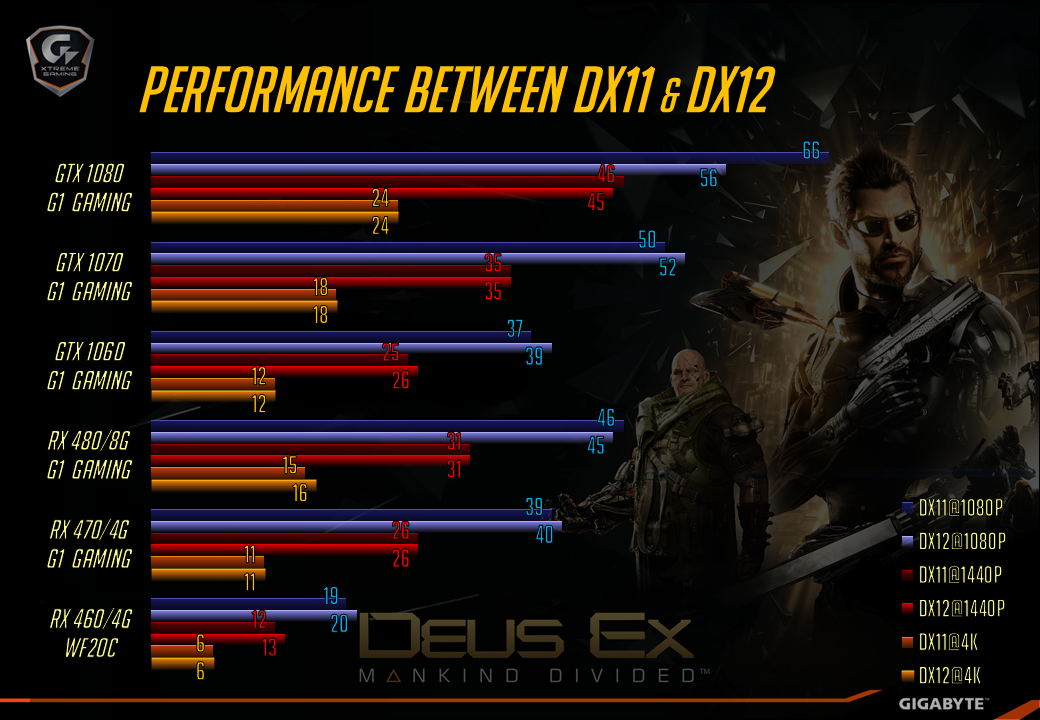 On September 8th, the developer launched a patch that could enable DX12 in beta mode. Though it is not officially and perfectly compatible with DX12 up to date, we can still take a peek at how these cards perform with the next-generation game engine. Yet the FPS benchmarks are quite identical between DX11 and DX12. There is only an FPS drop with GTX 1080 from DX11 to DX12 for unknown reason. Please note that we only ran this test at Ultra preset, and the results may vary at lower presets. In the end, we suggest you stay in DX11 for there seems to be no significant benefits with DX12. 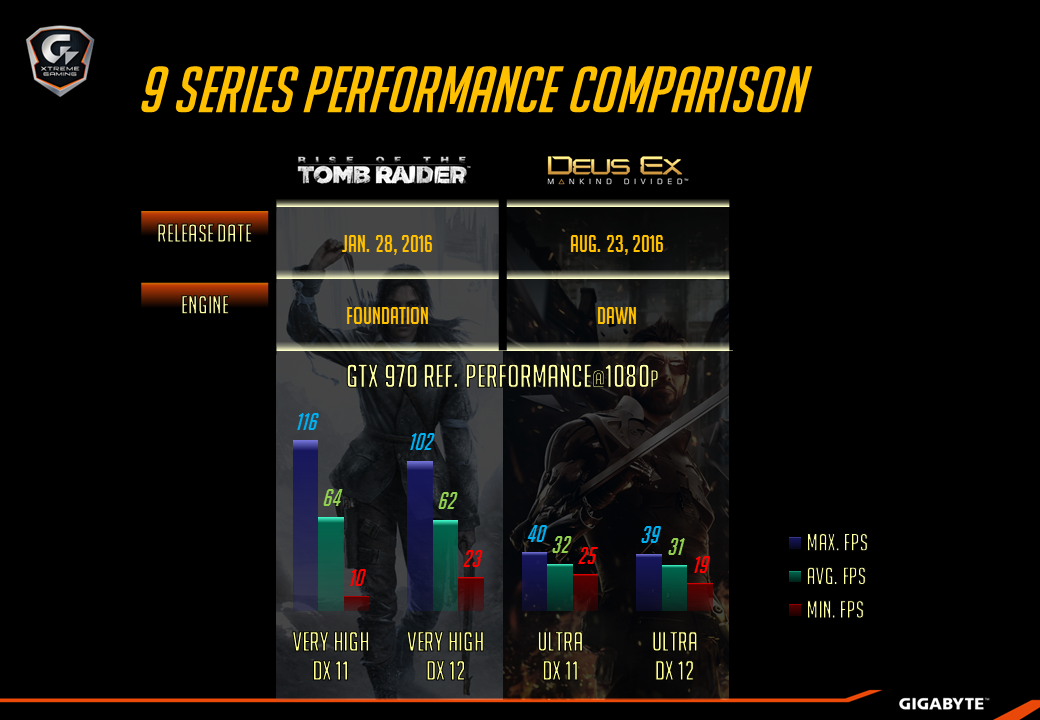 Last but not least. We feature this final performance test for those who still equip with a 9 series GTX graphics cards, to see how demanding technology has become. You can see the performance of GTX 970 Reference between Rise of the Tomb Raider, the last epic title published by Square Enix, and Deus Ex: Mankind Divided. Despite that both games are released in 2016 and compatible with DX12, there is still a great gap in the performance in-between. Let the numbers speak for themselves. 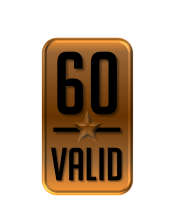 Poor optimization. Only the top-tier graphics cards can deliver 60 FPS.

※ "Deus Ex" series and "Rise of the Tomb Raider"  are the intellectual property of Eidos Montreal and/or Square Enix.
※ All related images used in this article are copyrighted to Square Enix and their respective owners.

※ XG Blog does not claim to own the copyright of any materials involved.